I can’t remember things. I am a list maker by nature to keep my life together. I don’t remember what I’m supposed to do today or if I ate yesterday, but I remember every detail of how stage 4 colon cancer wrecked our lives. Sometimes I wish it was easier to forget the big things.

January 2017 we went on vacation to Disney World. We were there for marathon weekend and cheering on our crazy friends who decided running every race that weekend was a great idea. It was the coldest I’ve ever been in central Florida and it was right in the middle of the worst flu season I’ve ever lived through. 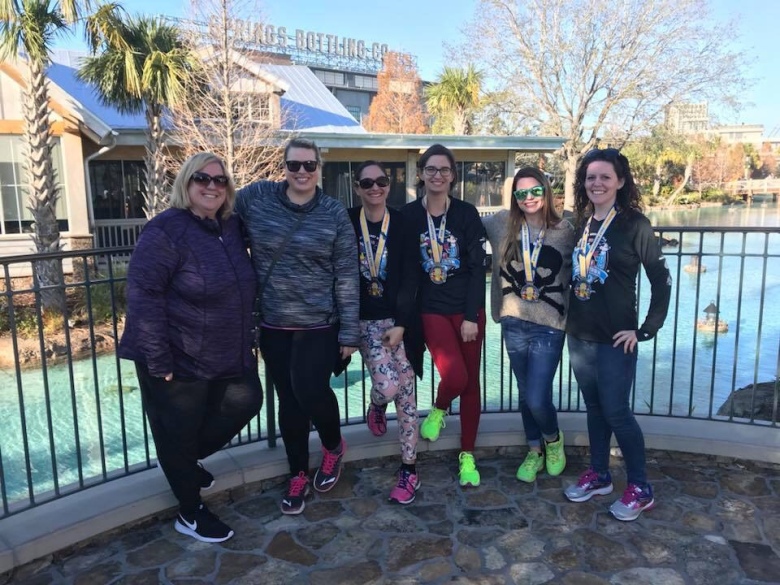 Since Disney is the germiest place on the planet, I got the flu. I remember feeling so sorry for myself when my husband Matt and our 4 year old daughter, Quinn, had to leave me in the hotel to go run around the theme parks alone. Looking back, I’m so glad they had that time together. Just a girl and her dad, taking on the world.

When we returned home to Alabama, he started going downhill. He went to urgent care and was diagnosed with flu, types A and B. He was prescribed tamiflu and sent home to rest. Four days later, he was miserable. He was getting worse instead of better. Young, healthy people were dying from the flu that year, so I was hyper aware that this could be really dangerous for him. I remember him saying he thought he needed to go to the ER because he felt like he was dying. We loaded up and took him in to be checked out. The ER doctor thought that he was possibly having a reaction to the tamiflu. They instructed him to stop taking it and go home to rest. Less than 24 hours later our lives changed forever.

He couldn’t walk without help. I had to threaten him with an ambulance and then physically drag him out of bed. He couldn’t hold his own weight up and I remember hearing glass break as I dragged him to the car. I still don’t know how I got him to the car alone. I feel like in that moment I had superhuman strength, but we got there.

A CT scan was ordered and a blockage was found in his colon. He was 33 years old and otherwise healthy. The ER doctors thought that there was a strong possibility that the blockage was impacted stool from him dehydrating so fast. They transferred him by ambulance to another hospital to be prepped for surgery. At the second hospital, he continued to deteriorate further. He was vomiting what we called Black Death. He was so dehydrated and weak. No one was saying cancer. We were still operating under the assumption that this blockage would be removed and we would go on with our lives.

A colonoscopy before surgery stumped the doctors. He had no polyps at all before the blockage. The doctor that did his colonoscopy told me and my dad that the rest of his colon looked completely healthy, but that the blockage needed to come out. Nothing was getting past it.

Matt was the most stubborn person in the world. He knew he wasn’t supposed to eat or drink before surgery but after several days of vomiting profusely, he was so thirsty. He fought water bottles out of my hand to chug them. He was desperate for apple juice. He begged. Right before they wheeled him into surgery he downed a 20 ounce bottle of water. I was so mad at him but I see now how desperate he was for hydration.

Plenty of people offered to come sit with me during the surgery. I told them all no, because the hospital was filled with people suffering from the flu. I didn’t want anyone to be exposed that didn’t have to be, because up until this point we thought the flu was the cause of all of this. I sat in silence and waited. I was the only person in the waiting area.

The surgery was supposed to last about 2 hours. Four hours later the surgeon was standing in front of me saying words that I struggled to comprehend. He told me he went to remove the blockage and couldn’t. He told me when he looked around, he saw “lesions”. I didn’t know what any of this meant. I asked him what it looked like. He said it looked like cancer, but we wouldn’t know until pathology came back. I remember asking him where it was and how much of it there was. He told me that he had never seen this on someone Matt’s age. He looked just as shocked as I was and said “it’s everywhere”.

I felt the wind knocked out of me. I walked over to a couch in the corner of the empty waiting area and called Matt’s parents in England. That was one of the worst phone calls I ever had to make. They immediately made travel plans to get to America.

I got back to the hospital room in a daze. I walked in and saw where the bed was that he had been wheeled down to surgery in. The empty room was chilling. I started to go into a full blown panic attack and I was there alone. I looked up at the dry erase board and saw where a nurse had scribbled the number for the chaplain. I picked up the phone to call for help because I thought in that moment that God was the only way through this. The minute I picked up the phone to dial, I heard my mom’s voice. She walked into the room and I hung up the phone and tried to calmly tell her what the surgeon said. Then I lost it. I don’t care how old you are, what your relationship is, how crazy you drive each other- you always need your mama. I sobbed into her arms and screamed over and over again that I couldn’t tell him that it was cancer. She did what mama’s do. She picked me up off the floor when I couldn’t do it myself and she has every day since.

Since the surgeon wasn’t able to remove the blockage, he performed a loop ileostomy on Matt. Imagine going under for surgery and waking up with your intestines hanging out of the side of your body, because that’s what happened. He didn’t understand what an ileostomy bag was or how long he would have to have it. He was still so sick and dehydrated, and now he was filling up ileostomy bags with the Black Death that was previously coming out of his mouth. He was overproducing bile so he had to have an NG tube placed down his nose to pull the bile out of his body. He was filling buckets at a rapid pace. Before the NG tube he would projectile vomit to his feet over and over again. It offered him some relief, but he was still a very sick man.

Pathology took over a week to come back. By then, his parents were there with us and mine were in and out. I went days without seeing our daughter because I couldn’t make myself leave him. The day of his diagnosis, the physicians assistant for the oncologist came walking into the hospital room. She was the worst possible person to deliver this news to us. Dry as burnt toast. We had both fallen asleep and woke up to her standing over us. She started talking and throwing medical jargon at us with no compassion whatsoever, and I struggled to process what she was saying. I kept asking her to repeat herself. When what she said hit me, I wailed.

3 months. 6 if we were lucky. Definitely no more than a year to 3 at the very most.

Oddly, in that moment he was comforting me. He was so strong and so positive and determined to fight and beat it. He wouldn’t accept that this was it for him. He made me believe that he could beat it, too.

A year and a half after his diagnosis, he passed away in our living room on hospice, surrounded by the people who loved him the most. We exhausted all options. We left no stone unturned. We drained our bank account. We tried every single thing we could. The strongest man I’ve ever met, the one who spent his days hanging off the back of a freight train by one arm for a living, was a shell of a person. As his beautiful eyes turned orange from liver failure they still didn’t lose the sparkle. Our daughter has his eyes. I see him in her every time I look at her. He couldn’t force a smile in those last days, but we kissed his face and held his hands and loved him. We did everything we could to save him, but the Angel of Death that delivered the news to us that day was right- it got him.

Seeing him choose hospice after fighting so hard was the most brave thing I’ve ever witnessed. He went on his own terms. We had weeks to talk about the big things. He was able to tell me what he wanted for our future and when he died, he had left no word unsaid. I may never know that feeling again, but I know how much he loved me.

I don’t know much about life. But because of cancer, I know this- life is precious and short and crazy and fleeting and worth living to the fullest. He made sure that every single person he loved knew it. Even in death, he found ways to make sure we were taken care of. If love could’ve saved him, he would still be here. He was loved by so many people.

We need to have a real conversation about colon cancer in young people. He was diagnosed at age 33, dead at 35. He would’ve never made it to “colonoscopy age”. He was not genetically predisposed. He was exposed to carcinogens at his industrial job that caused his cancer and triggered the growth. The flu essentially saved his life by dehydrating him and exposing the cancer. Otherwise he would’ve likely just died without us knowing why until after the fact. We were lucky to have time with him, even though the time was pure torture for him. Others are not so lucky.

Large corporations are exposing millions of people to crap that’s killing them daily. The EPA is corrupt on a state and federal level. Money hides everything. Profit over people, always.

But real people are dying. And my daughter has to grow up without a dad. He won’t be here for the big moments. He won’t walk her down the aisle. He won’t see her graduate from college. He won’t hold his grandchild one day.

We won’t grow old together.

Matt was born on April 5, 1984 in England. He immigrated here because he loved America and he loved me. He was working the job of his dreams, playing with trains all day. He died on August 10, 2019 after the job he loved killed him.

35 years on this earth was not enough. We were robbed. They took the best years of our lives away from us. 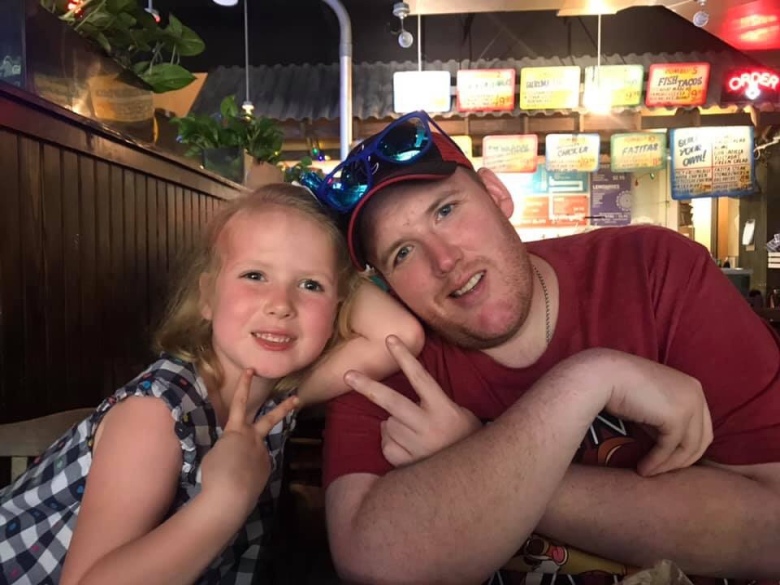 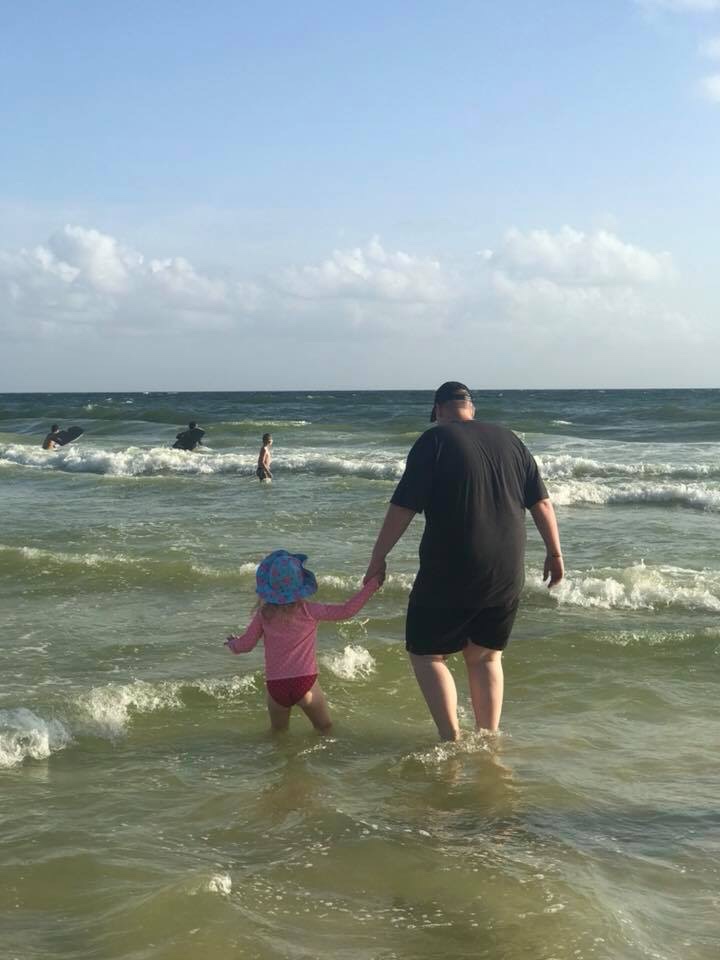 Today as you go through life like we used to, blissfully unaware that anything horrible could ever happen to someone so young, love big. Hug people. Tell them how you feel because you may not get the chance to again. Laugh hard and often. Don’t take anything too seriously because it’s all just white noise distracting you from real life.

Do it for Matt, because he can’t.